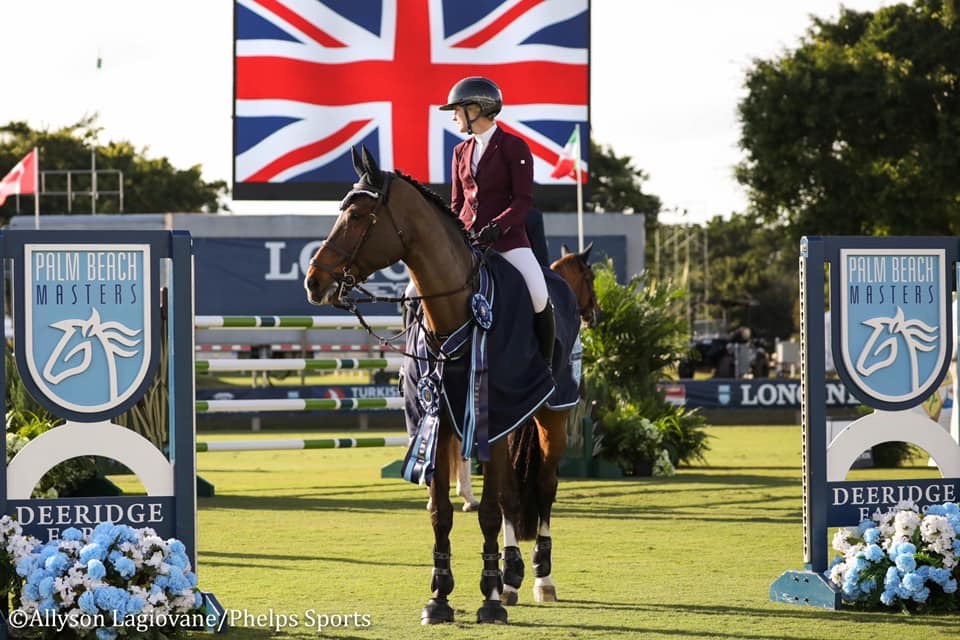 Wellington, Fla. – Jan 30, 2020 – For the fifth year in a row, the Jacobs family welcomed an international field of horses and riders to the stunning Deeridge farms in Wellington, Florida for the Palm Beach Masters series. On the second day of competition, 46 horse and rider duos representing nine nations took to the grass field for a shot at the top prize in the $36,600 Suncast Welcome Stake CSI4*-W. In a race against the clock, 15 riders managed to make it around the 12-effort course clear within the 76 seconds allowed, but it was ultimately Emily Moffitt (GBR) and her 13-year-old mare, Tipsy du Terral, claiming the fastest time.

With course designers Alan Wade (IRE), Ben Townley (GBR), and John Doyle (IRE) at the helm, challengers were up against 12 obstacles at the 1.45m height, including several tricky double combinations. The second horse and athlete duo to take the grass, Erynn Ballard (CAN) and Judge Hof ter Zeedycke, kicked the class off with an early leading time after racing to a clear round in just 60.43 seconds. The 13 contenders that followed unsuccessfully attempted to beat Ballard’s speedy time until Moffitt entered the arena. She was able to unseat Ballard’s lead, riding away with a fault-free round in a time of 60.38 seconds.

Following the first half where just seven of 20 horse and athlete pairs managed clean rounds, Daniel Coyle (IRL) and Farrel laid down a fault-free round of 61.78 seconds that ultimately pushed them into the third place spot. Though 20 more combinations would take to the field, no duo proved able to break into the top three.

Under Ben Maher’s tutelage, 22-year-old Moffitt and Tipsy du Terral have notched noteworthy wins under their belt during the last two years, including winning the Mediterranean Equestrian Tour Grand Prix CSI2* in Olivia, Spain in 2018. Moffitt plans to compete in the $230,000 Longines FEI Jumping Nations Cup™ at the Palm Beach Masters representing her home country of Great Britain, which kicks off Sunday, February 16.

Show jumping will continue at the Longines FEI Jumping Nations Cup™ USA week at Deeridge Farms, with the grand finale, the $213,300 CSI4*-W Longines Fei Jumping World Cup™ Wellington, bringing athletes from around the globe to Wellington, Florida to compete for the top prize.

On her winning round:
“It all kind of panned out fantastically. I went in and Ben [Maher] said, ‘Let’s just go for it, let’s win something.’ I haven’t had the best start to the season and it’s great. I feel like I’m back on my feet now. It was just one of those rounds where everything came up perfectly, so I was lucky that it happened because it makes a big difference. [Tipsy du Terral] is so careful in doubles, that allows me to really gallop in and the last jump, I have to hold her off a little bit. I think that’s probably where I got it done today.”

On Tipsy du Terral:
“She’s my trusty steed – throw her in anything and she gets it done. I’ve had Tipsy for a few years now. I remember trying her actually – she’s very strong. My little arms have to really step up their game when I ride her! But it’s nice because she just drags you everywhere and you’re just along for the ride. She’s a really great partner.”

On her plans for the season:
“We’ve already changed our plans a little bit with coming to [the Palm Beach Masters], which obviously worked out in our favor. I think we’re just going to keep playing it by ear and just hopefully I have my other horse Winning Good in the Nations Cup here in a few weeks and I’m really looking forward to that.”