Olympic Ambition Fuels Moffitt as She Blazes to Derby Field Victory in Week 11 of the 2018 Winter Equestrian Festival By: PBIEC Admin

Wellington, FL — March 22, 2018 — Of the 93 starters in the $70,000 Equinimity WEF Challenge Cup Round 11, held on the grass derby field at Equestrian Village (home to the Adequan® Global Dressage Festival) on Thursday, March 22, it was Great Britain’s Emily Moffitt on Tipsy Du Terral who emerged triumphant during week 11 at the 2018 Winter Equestrian Festival (WEF).

Highlights of the upcoming week 11, sponsored by CaptiveOne Advisors on March 21-25, include the $205,000 CaptiveOne Advisors Grand Prix CSI 4* at 11 a.m. on the grass derby field at Equestrian Village (13500 South Shore Blvd.) and the $132,000 Hollow Creek Farm 1.50m Classic Final at 6:30 p.m. in the WEF International Arena on Saturday, March 24, as well as the George H. Morris Excellence in Equitation on Friday, March 23, at 5 p.m. in the WEF International Arena and the $50,000 Hermés Under 25 Grand Prix Series Final at 12 p.m. at the grass derby field on Sunday, March 25. WEF hosts hunter, jumper, and equitation competition until April 1 and offers more than $9 million in prize money.

Clears in the first round were plentiful, and 33 riders made it through to the jump-off in this qualifying class, though eight withdrew between rounds. Course designer Germany’s Olaf Petersen Jr.’s track asked plenty of questions, with a large, long-striding triple combination tripping up some good combinations. 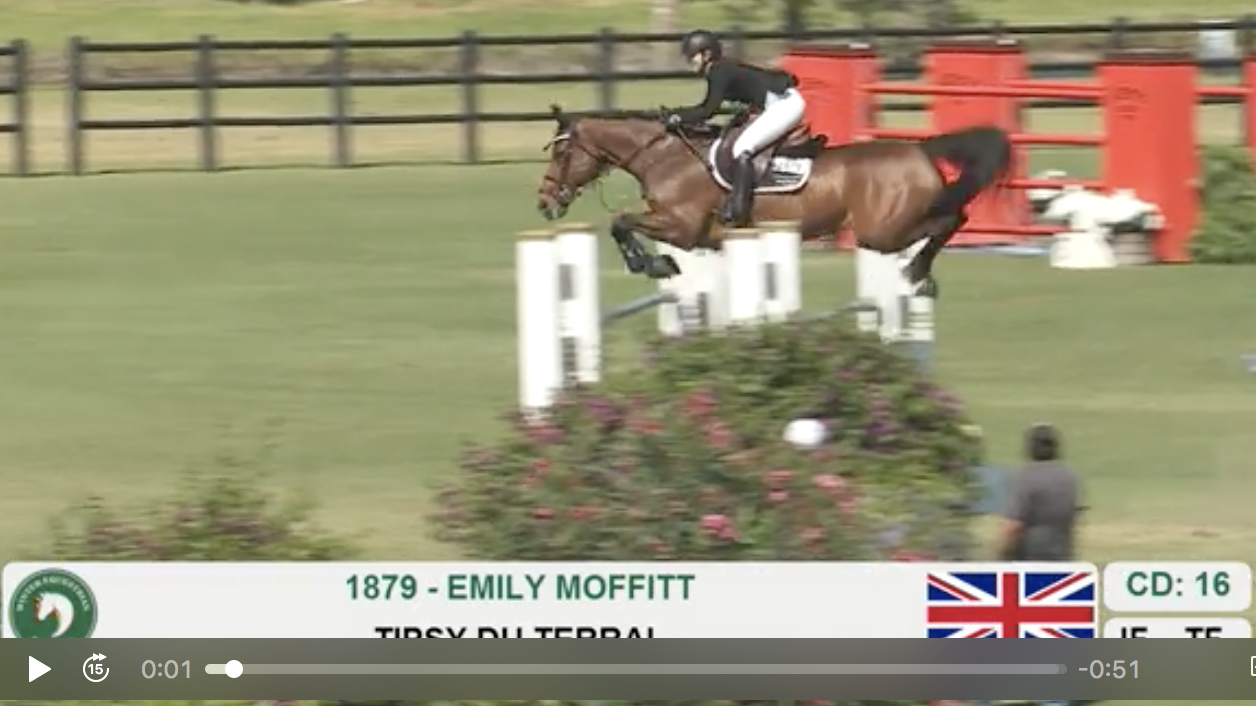 It was fast, tight riding from Moffitt on the 11-year-old Selle Français by Toulon that sealed the deal, producing two faultless clears. It was the mare’s second WEF win this season.

“We won the grand prix the first week and this is our last week, so it was a nice way to start and finish,” said Moffitt, who acquired the horse at the end of summer 2017. “Tipsy and I had jumped a few 1.40m classes in Europe before WEF. Then Ben [Maher, Moffitt’s trainer of two years] said we should go in the grand prix and we went for it and won it. We then let her hang back for a few weeks here while I got used to some of my new horses.”

The “gigantic”, big-striding horse relished the manicured grass arena, reported the 19-year-old. “The grass backs her up a bit and she’s obviously careful,” she said. “I let her go and sit and hold against it, and she just does her job. But there we so many clear — 33 — so I was on the line about whether to save Tipsy for the grand prix or this, but Ben and I decided that seeing as the season hasn’t gone quite as well as we’d hoped, and we were clear, we might as well go for it. I told him that if he was going to have me ride the jump-off, I would really go for it. There’s no point in trying to be in the medium ground.”

The teenager has an impressive 20 horses stabled in Wellington for the season — all of whom are ridden by her, with help from Maher — and she has 10 grand prix horses. But her singular focus is to jump at an Olympic Games, and that is the big ambition that drives her daily. Her next stop is the Global Champions Tour show in Shanghai next month.

“The Olympics is all my mind is set on right now. I sort of had to be fast-tracked because I only began competitively riding bigger than 1.30m classes about five years ago,” added Moffitt, who credits early training with Nick Skelton and Laura Kraut for her foundation. “I just woke up one day and decided that I want to go to the Olympics; I know that isn’t very normal, and my dad, Ben, and I have really had to step up our game.”

Both the remaining riders on the WEF Challenge Cup podium were American: Winn Alden threw down a valiant challenge on the 10-year-old Charlie, but found herself half a second off the pace. Olympian McLain Ward had to settle for third on Double H Farm’s HH Callas, coming within 0.2 seconds of Alden.