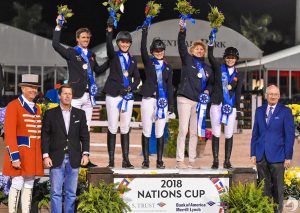 2018 started with a win for Emily Moffitt & Tipsy Du Terral and from then on we continued the winning streak.  Between Emily Moffitt, Ben Maher and Emily Mason many GPs were won from 2* to 5*, all successful as each other.

New young horses,  were introduced to the team and proved to be consistent and competitive.  Second string were put through their paces and proved they were all we hoped and more, with our young 9 yr olds being spoken of as ‘the best in the world at present’.

Ben Maher and Emily Moffitt rode on the Poden Farms won Global Champions League, The London Knights and helped them win the 2018 GCL Title at LGCT, Doha.  Ben Maher also took the Individual LGCT Title riding Poden Farm horses by wining three of the GPs in the season aswel as many top ten placings throughout the season.

Below is a few memories captured throughout the year.

Starting 2019 as we mean to go on… Ben Maher takes a GP Win and top results...
Scroll to top