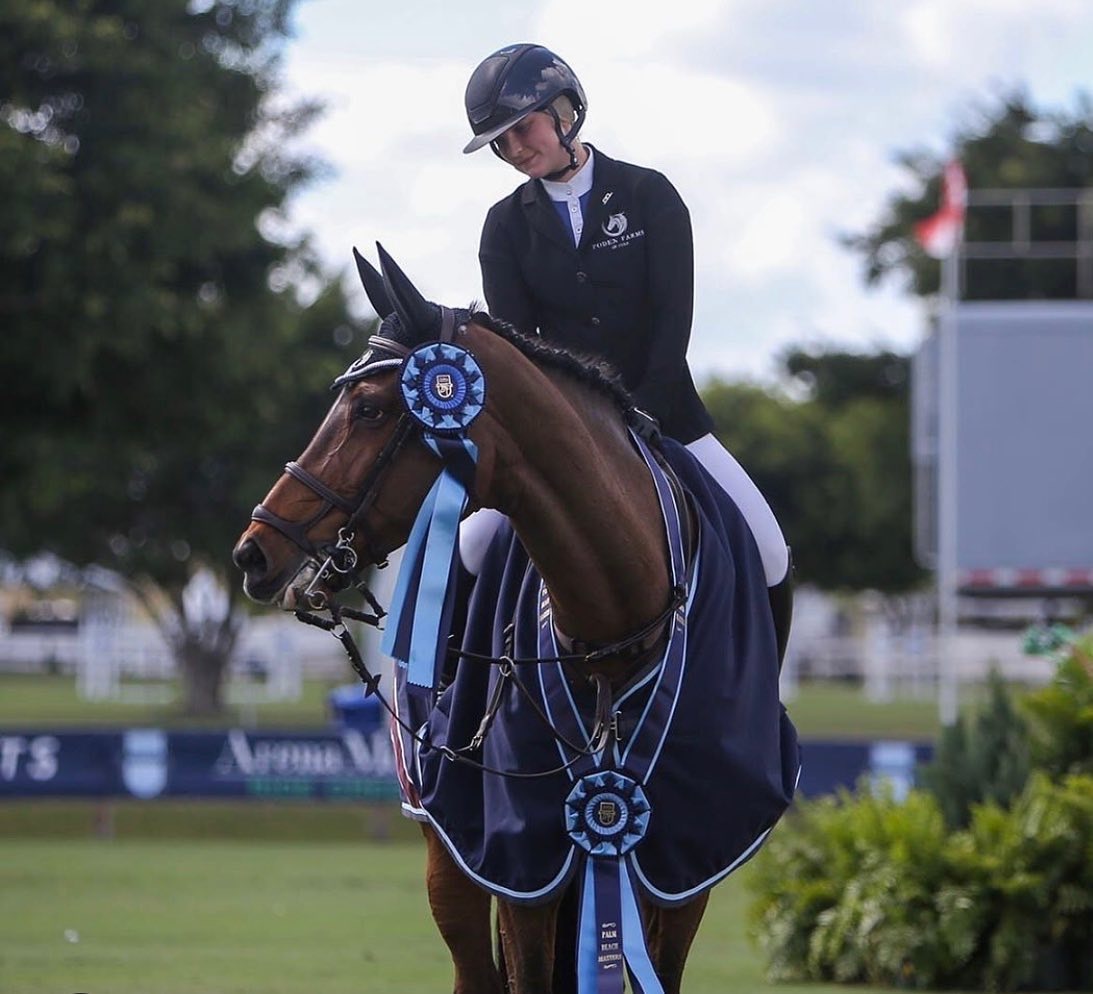 Wellington, Fla. – Mar. 14, 2020 – Forty international contenders were spotlighted Saturday at Deeridge Farms as it hosted the $137,000 Palm Beach Masters Classic CSI5*, one of the penultimate classes of the Palm Beach Open CSI5*/CSI2* Week during the Palm Beach Masters Series. The elite field was composed of representatives from 15 nations, each of whom were chasing the hope of prize money and valuable Longines ranking points. Headed into the jump-off, seven countries were still standing, but Great Britain proved to be the home of the big winner as Emily Moffitt (GBR) and Tipsy du Terral claimed the coveted top prize, adding to Moffitt’s quickly growing list of accomplishments in 2020 alone.

At the helm for the contest was FEI Level 4 Course Designer Alan Wade (IRL), who crafted a 16-fence first-round track of lofty obstacles that were built up to 1.55m in height. Riding fifth in the start list, Lucas Porter (USA) piloted C Hunter to the first successful effort of the afternoon after a number of the first few challengers downed portions of the triple combination late in the course, which proved to be one of the bogey obstacles of the class. Adding his name to the short course order-of-go, Eduardo Menezes (BRA) crossed the finish line with all the fences intact aboard Magnolia Mystic Rose, followed soon thereafter by Billy Twomey (IRL) on Kimba Flamenco.

As the first half of the class progressed, Lillie Keenan (USA) and Skyhorse, Beezie Madden (USA) with the reins on Chic Hin D Hyrencourt and Ben Maher (GBR) on Tic Tac joined the clear ranks to bring the total to six returners at that point. The latter half of the class saw even more athletes qualify for the jump-off as Mario Deslauriers (CAN) and Cloud, Darragh Kenny (IRL) with Billy Dorito, Daniel Bluman (ISR) on Colestina H, Kelly Soleau (USA) riding Cacharel, Moffitt with Tipsy du Terral, Jens Baackmann (GER) on Caprice and Conor Swail (IRL) aboard GK Coco Chanel each turned in clear performances.

Trimmed down to only eight efforts, Wade’s jump-off pattern was challenged by the 13 eligible pairs. Serving as the trailblazers, Porter and C Hunter came straight out of the box with a double-clean effort, tripping the timers in 39.36 seconds to set the pace. Just milliseconds behind the frontrunners, Menezes galloped Magnolia Mystic Rose to a valiant effort, breaking the beam in 39.69 seconds as the second partnership to leave all the rails up twice in a row, followed by a series of too-slow duos. Though they had the footspeed with a time of 39.03 seconds, Kenny and Billy Dorito dropped a single rail to incur 4 faults against them, leaving Porter still in the lead with five combinations left to ride. Third to last, Moffitt finally forced the lead to change hands as she maneuvered Tipsy du Terral, co-owned by Neil and Heidi Moffit and Poden Farms, to an efficient trip that left all the fences upright in a blazing time of 38.30 seconds to jump to the top spot.

Giving Moffitt a run for her money and keeping things exciting until the very end, Swail sliced across the grass field with Vanessa Mannix’s GK Coco Chanel, ultimately finishing on a double-clear time of 38.57 seconds, just tenths of a second behind the leading pair to claim the reserve honors. Rounding out the podium was Porter and C Hunter, owned by Sleepy P Ranch LLC, in third place overall. The final rankings were tight as the top six finishers all crossed the finish line during the jump-off within two seconds of each other.

Moffitt has begun the 2020 season on a particularly high note as she continues to rack up blue ribbons and other top placings in international competition. During the Longines FEI Jumping Nations Cup™ USA week of the Palm Beach Masters at the end of January, Moffitt and the 13-year-old mare Tipsy du Terral clinched back-to-back tricolors in the $36,600 Suncast Welcome Stake CSI4*-W and the $36,600 NetJets Speed Challenge CSI4*-W. Two weeks later, she piloted Winning Good to one of only four double-clear performances in the $230,000 Longines FEI Jumping Nations Cup™ of the United States of America CSIO5*, serving as an integral member of the all-female Great Britain team that finished in second position. Just two days prior to Saturday’s victory, Moffitt earned fourth place in the $36,600 Suncast Welcome Stake CSI5* at Deeridge Farms aboard Tipsy du Terral, as well.

On her successful season in Wellington:
“It has definitely been quite a season. Now that coronavirus is closing everything down, it is especially great to close off the season this way. I was in a rut coming here, but I think it is safe to say I’m out of it, at least for now.”

On where she cut time in the jump-off:
“I think the final line, and I kept going the entire way. I never took one pull, so that is probably where I got it. I was a little nervous about not getting it, but we did!”

On Tipsy du Terral:
“Tipsy has been my go-to for a few years now and she has always been one that I can always get on and feel confident. She is super special to me. You don’t come across many horses who can give you that feeling, so I’m really lucky to have her.”

On the courses:
“It was tough. There were quite a few big verticals and wide oxers. [Going late in the jump-off order] definitely helped. A few weeks ago I was first to go and I think I ended up fifth. Going in like that you sometimes have no clue what you need to do, so it definitely played a big factor in winning it today and I was lucky to have that draw.”

Some impressions from today @tops.international.ar

WEF 2021 coming to an end...! @emilymoffittofficia

Last week of WEF has started for Emily and two of

Happy Birthday @parkin.russell 🖤💫🥳 As we