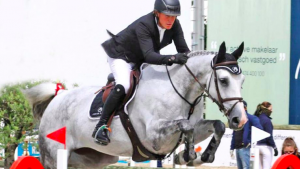 A top showjumper who used the services of an animal communicator for a “quirky” horse said the mare has jumped clear in every competition since.

Young British rider Emily Moffitt was contacted by Joanna Bornowski, of The Wild Thread, to ask whether she could work with one of Emily’s horses. Emily told H&H 10-year-old mare Kalinka De Kalvarie came to mind straight away.

“She isn’t very straightforward like some of the others I have; she reminds me more of a human, with a more complex personality than a horse!” Emily said. “She wants to spend time with you but likes her own space, wants you to go in her stable and pet her, then it’s ears back and ‘never mind, go away’. She gets frustrated with things quite often and I was struggling to find a pattern to what was triggering that frustration.

“I thought I would figure it out, like I have with the others, but when Joanna messaged me, I thought it was a great opportunity to learn more about Kalinka.”

Emily sent Joanna photographs of Kalinka, and shared some basic details about the mare.

The communicator then called her back.

“She was so insightful,” Emily said. “It was a long conversation about Kalinka’s likes and dislikes, but she mentioned that Kalinka finds everyone very kind to her in the barn but that she gets very frustrated with herself; she knows she is talented but isn’t getting where she wants to be.”

Joanna said Kalinka had reported liking her red treat ball, and said she wanted to be read to.

“That was really funny as I used to sit with another horse and read my book, and Kalinka’s two stables down from him so would have seen that; and there’s no way Joanne would have known it,” Emily said.

She added that the mare is always thinking one step ahead rather than what is being asked of her in the present moment, which Emily said made sense from her perspective.

Emily’s trainer, Irish showjumper Cameron Hanley, who is riding the mare at the moment, changed his way of riding her as a result, trying to be even more patient than usual, and being very exact in how he asked questions of her, and Emily said he “felt a real breakthrough, and that she was much more focused”.

“I’m very open-minded,” Emily said. “I don’t know if it would help every horse, but for the likes of Kalinka, who’s got a very complicated personality; any help is something, and there’s no downside to doing it.

“All our horses get cuddles and treats, but I’ve tried to focus more on her since this and I think Cameron’s noticed the difference most in riding her.

“I asked Joanna to tell her not to worry and that she was a part of our team and not going anywhere so I hope that helps her find peace and relax a little!”

Have you used an animal communicator? Email hhletters@ti-media.com including your name and nearest town for the chance to be featured in the letters page of a future issue of Horse & Hound magazine…

Some impressions from today @tops.international.ar

WEF 2021 coming to an end...! @emilymoffittofficia

Last week of WEF has started for Emily and two of

Happy Birthday @parkin.russell 🖤💫🥳 As we